Spokane County Fire District 8 provides a full range of services that include fire suppression, emergency medical services, fire prevention, education and investigation, and associated support and maintenance services to our 23,917 citizens in a 110 square mile area in south Spokane County.

SCFD8 members responded to 4,186 calls for service in 2021 from the District's four fire stations located in the Moran, Valleyford, Ponderosa, and Saltese areas. Each station is staffed twenty-four hours a day with a combination of career, part-time, and volunteer personnel.

Spokane County Fire District 8 operates under the State of Washington laws and codes governing fire departments by direction of a three-person Board of Fire Commissioners: Andy Rorie; Lee Boling, and Greg Hesse.

A Brief History of SCFD8

In early 1947 several community-minded citizens got together to discuss the formation of a fire district to serve the communities south of the City of Spokane and south of Fire District 1, which serves the Spokane Valley.

On Tuesday, August 19, 1947, a special election was held; and on August 29, 1947, Spokane County Auditor Lee P. Salmon and Spokane County Commissioners Wylie W. Brown, T. T. Grant, and H. A. Raymond approved the formation of the Fire District. A special meeting of the first Board of Fire Commissioners was held on September 15, 1947, at 2801 S. Cherry Lane in Glenrose for the purpose of establishing Fire District 8. William C. Bahme of Moran, C.M. Meenach of Valleyford, and A. B. Crisler of Mica were elected as the first Fire Commissioners. F.R. Chamberlin was chosen as Secretary pro tem.

Fie District 8 took delivery of its first fire truck in August of 1949. This truck was parked at the Fire Chief’s house and at McClung’s wrecking yard which was located on the north side of 57th and Regal.

On October 9, 1951, the Board of Fire Commissioners agreed to purchase the old Valleyford Bank building to use as Fire Station 2.  In 1980 a new building was built on the Palouse Hwy to replace that station and is still in service today as Fire Station 82.

In January of 1962 a fire station in Mica was completed and named Fire Station 3; that station is no longer in service.

On July 10, 1973, the Board of Fire Commissioners approved the purchase of land to build a fire station in the Ponderosa neighborhood. In November of 1974 that station was complete and named Fire Station 4. Additional bay and resident quarters were added to the station in 1980. It is still in service today and is currently known as Fire Station 84.

In 1989 the Saltese area was annexed into Fire District 8; and in 1990, Fire Station 5 was built to serve that area. That station is still in service today and is known as Fire Station 85.

Fire Station 81, which is located at 61st and the Palouse Hwy, was constructed in 2002 on property that was once owned by former Fire Chief Walter Lasz.

Read more in the 75th Anniversary Special Edition of the Fire 8 Flyer. 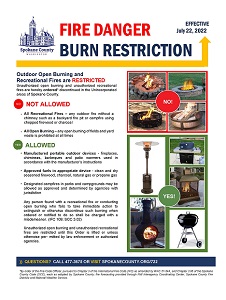 Effective July 22nd and until further notice, outdoor and open burning, and recreational fires in Spokane County are restricted.

All recreational outdoor fire without a chimney, such as a backyard fire pit or campfire using chopped firewood or charcoal, is not allowed.

Manufactured portable outdoor devices such as chimineas, barbeques, and patio warmers that are used in accordance with the manufacturer's instructions are allowed. Designated campfires in parks and campgrounds may be allowed as approved and determined by agencies with jurisdiction.

For a list of what type of devices are allowed and what types are restricted read this Notice from Spokane County.

Effective July 1, 2022, the Department of Natural Resources (DNR) has directed that all debris burning on DNR protected land is prohibited. This includes rule and permited burns. Campfires are allowed in approved, designated campgrounds only.

For the most current information on burning in your area, visit www.dnr.wa.gov/burn-restrictions.

Those times when burn restrictions are not in place, the type of natural vegetation you wish to burn and where you live determines whether or not you can burn and what rules apply. The only material that may be burned in Washington state is natural vegetation, and only under specific program requirements. Three types of outdoor burning are allowed: (1) residental yard and garden debris, (2) silvicultural (forest) debris, and (3) recreational fires. SCFD8, together with our partners at Spokane Regional Clear Air Agency, and Washington Department of Natural Resource, have created this informative Can I Burn video to help you determine if and what you may burn.

The next regular
Board of Fire Commissioners
meeting is scheduled for: